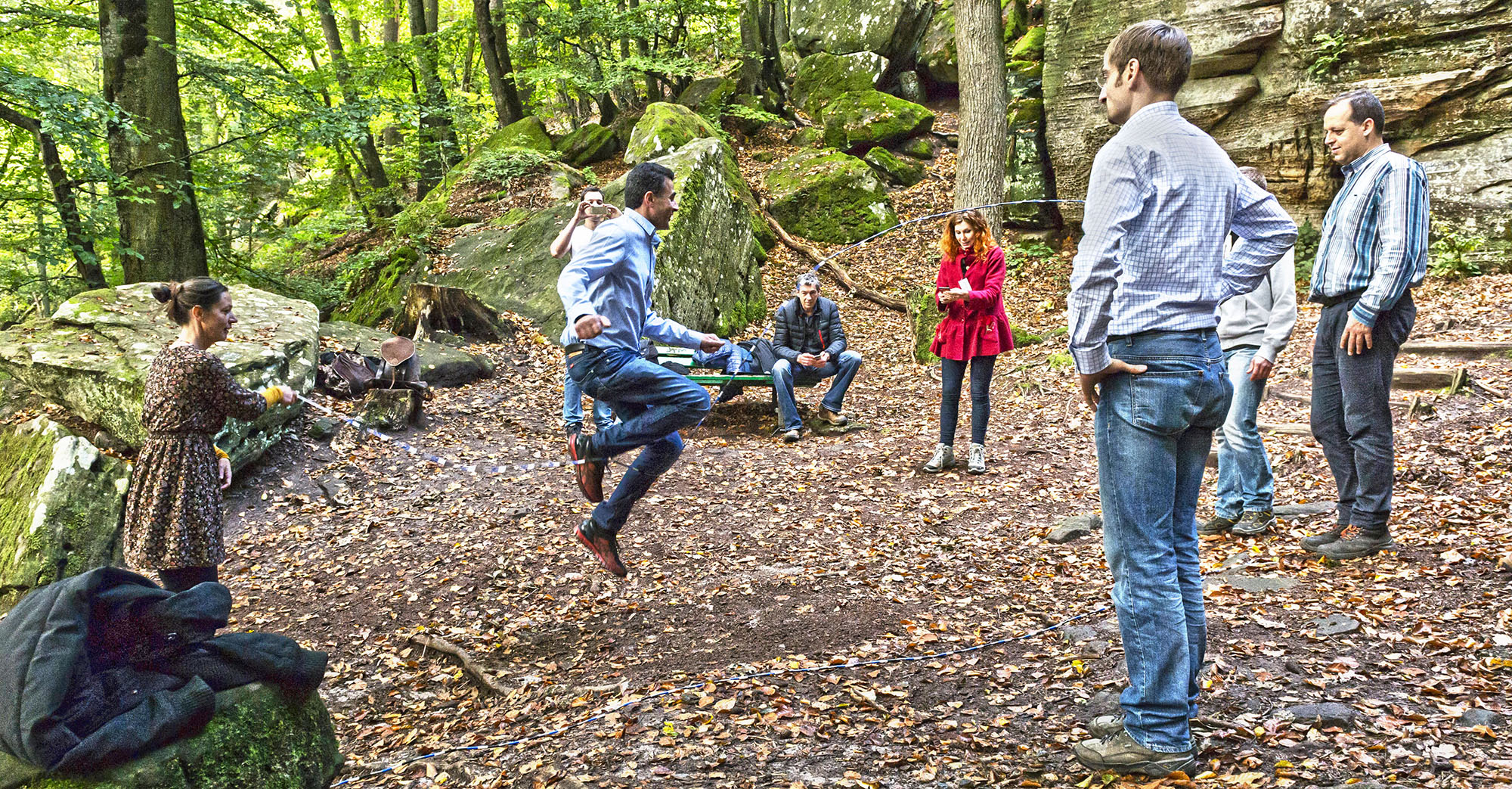 THE 5 SENSES ON THE ALERT

Follow a course in the heart of nature and put your 5 senses to the test as a team! Example of tests: “the path of sensations”, “blind”, “find the smell”…

THE TREASURE OF THE 7 DWARFS

Once upon a time, 7 very canny dwarfs discovered a treasure deep inside the mines. They didn’t want to announce it to the world, but decided to keep it all to themselves. They promptly hid it again in a different spot, but fate prevented them from ever retrieving it, or revealing its whereabouts. Some time ago, a group of novice history buffs discovered a mysterious map in the mine…Enter the mines of Rumelange and use your teamspirit and your power of deduction to find clues that will help you to move forward. You just might encounter some strange creatures who will guide you right to the treasure!

IN SEARCH OF THE 7 KEYS OF MELUSINE

Legend has it that a mermaid is being forced to live her life beneath the waters of the Alzette River and can only appear to humans every 7th year. Find the 7 keys that will lead you to Melusina, with a little help from Super Jones, a very famous Luxemburgish adventurer. Take up the fun challenges using your team spirit and answer the quiz on Luxembourg in your roadbook. Good luck !

THE TREASURE OF THE ROMANS

Do you know Luxembourg Jones? Set off on an adventure with this famous Luxembourgish explorer to find the missing gold coins that the Celtic inhabitants and ancient Romans are said to have hidden in the Fond-de-Gras. Between mines and forests, use your collective mind and team cohesion to earn the clues that will lead you to the treasure.

Immerse yourself in the Middle Ages at the time of the knights and discover the art of combat, crossbow shooting and illusions. As a team, you will have to pass the tests to win the keys that will allow you to open the chest and win the treasure.

IN SEARCH OF THE GOLDEN DROP

Have you ever heard of the legendary ‘Golden Brothers’, the infamous Luxembourgish smugglers? It is rumored that they hid their last bottle of Brandy in the Moselle Valley. A parchment with a coded message was found a few weeks ago. Will you be the one to decipher it and find the golden drop? Call upon all of your 5 senses to find clues that will lead you to the hidden treasure, and satisfy your thirst for fun on the way!

As he was about to reveal the secrets of Luxembourg City, James Luxembond was assassinated. Search the culprit and explore little-known sites in Luxembourg City. Your journey will take you to different places steeped in history, such as the casemates or the crypt of the Grand Ducal Palace. Take the tests and find the solution to the puzzles to get the clues that will reveal the identity of the murderer.

IN SEARCH OF THE INEXHAUSTIBLE SPRING

In 1928, while conducting his own experiments, Walter Ostwald heard rumours about an inexhaustible spring of natural water and immediately set off to discover its location. Numerous others were also hunting this priceless natural treasure, but to no avail. Years later and by the greatest stroke of luck, a Luxembourger has now discovered clues that lead to the source. Put your heads together and you’ll have a chance of discovering this amazing spring!

Marcel, the kitchen clerk, has just been found murdered in the cellar by Marie, the waitress. This is how the investigation in which you will be immersed begins. As a team, you will have to interrogate the suspects, find the clues in order to unmask the killer who is in the room. Your spirit of deduction and logic will be put to the test. Can you tell the real from the fake?

Download our app ‘and discover the secrets of Luxembourg-city through fun challenges and amazing riddles. Be creative, use your logic and source the knowledge of the team to unlock bonus points and win this extraordinary race against time!

IN THE FOOTSTEPS OF HOMO EUROPEANUS

1856, in Moldavia-Wallachia, the slavery of the Roma ends. Groups of Roma then decide to migrate west. During their crossing, they stop in the Moselle region, in Schengen, the cradle of Europe, where they hide their wealth. Join forces and find the fabulous hidden treasure of the Roma!

IN THE FOOTSTEPS OF SAINT WILLIBRORD

Rocky landscapes and geological marvels make the Mullerthal an exceptional region. Willibrord couldn’t have picked a more scenic spot for a hiding place! Follow the saint’s tracks and enjoy an unique experience that delights and pleases the senses. Test your ingenuity and overcome the obstacles in your way and perhaps you will discover the famous treasure!

To wich house do you belong? Gryffindor? Slytherin? No charms or potions needed for you to experience this spell-binding story for real, just a bit of magic on our part! Not everyone has what it takes to be a great wizard; on your journey, you are certain to have some unusual encounters that will test your skills and abilities…Are you ready for this magical adventure? Are you up to the challenge? Then it’s off to Echternach!

THE FINANCIAL CENTRE ON ALERT

For a day, become a detective and enter the world of a plot full of twists and turns! A mission, clues, an enigma to solve: all the elements come together to experience a real police investigation in one of the most majestic settings: the heights of Esch.

In the fantastic setting of the Fond-de-Gras, take the train 1900 and dive into the heart of a plot worthy of an Agatha Christie novel. Impersonate the famous Hercules Poirot and solve the murder mystery of Jang Bunn. Interrogate train passengers, explore new trails, activate your cells alone and in a team to gather the clues that will allow you to discover the truth about the story.

LIFTING THE MYSTERY OF TUN SAITOUT

A terrible crime is shaking Luxembourg. Tun Saitout, a famous touristic guide, was killed when he was about to reveal where the Grand Duchy’s treasure was hidden. When his body was recently found in the Casemates, a mysterious letter was lying next to him…Go inside the Fort Thüngen, where the monk Guillaume Ambrosius will show you around and help you find out the missing pieces of this unsolved investigation. Honour the memory of Juan Lorca by trying archery, discover the history of the fort through artwork and defend your territory against the enemy. Will you be brave enough to discover the hidden treasure and solve Tun Saitout’s mysterious death?

IN THE WOLF’S DEN

Gather your forces and find your way through unimaginable paths, leading you deep into dark caves and high up to rocky cliffs. You won’t be alone – you’ll have the help of a GPS as you take on this crazy challenge, and you’ll discover codes that will lead you to the next step. Will you be able to find your balance and stand on a hoverboard? Will you be able to coordinate with colleauges for a successful round of Double Dutch? Share the fun with other teams via What’sApp, and get ready to feel like Indiana Jones for a day!

YOU HAVE A PROJECT, QUESTION, OR NEED SOME ADVICE?